Earlier today we released version 1.2 of MaxGalleria, our responsive image and video gallery plugin for WordPress; customers should be seeing the update notice in their WordPress admin anytime now. This turned out to be a fairly significant update, as it included one new major piece of functionality: a WordPress image slider.

In addition to the well-received Tiles and Showcase templates you get for your image and video galleries, the new Image Slider template turns your image galleries into a full-on slideshow. There are obviously plenty of jQuery slider plugins out there in one form or another, and ultimately we decided to use the excellent Nivo Slider to power our Image Slider template. The image sliders look great, work on all browsers (including Internet Explorer), and are responsive out-of-the-box just like the rest of MaxGalleria.

Here’s what the “Ghost” skin looks like, which is based on one of the themes built into Nivo Slider, but with a couple changes: 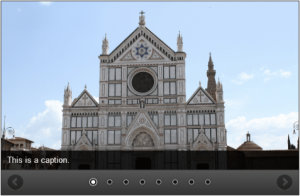 Other Items of Note

There were a few other semi-significant items in this release as well:

Added option to open thumbnail clicks in a new window. This was requested by a few customers, and probably should have been there in the beginning.

Added support for including/excluding images and videos from their respective galleries. Previously, if you didn’t want to show a particular image or video in your gallery, you had to remove it completely from the gallery. That’s fine, but what if you wanted to manage that image or video as part of the gallery, yet not show it on your site? Now you can with simple “Exclude” and “Include” actions.

Updated the NextGEN Importer to show edit link to the newly created gallery upon successful import. This is just a simple thing, yet enhances the user experience by saving a couple extra clicks. The less clicking, the better.